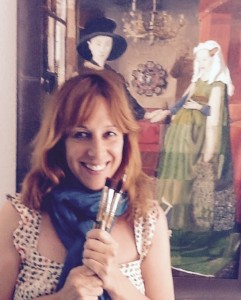 The work arose out of the idea to explore a sense of “egolessness” in painting. Usually a painter will spend hours in a studio producing works which are identifiable as his/hers. They are then sold and highly prized for their individual style. I wondered what would happen if I invited other people to paint my paintings with me. I would provide the skeleton in the under drawing and divide the image into a grid as the Old Masters did. I then researched Old Master workshops and was surprised to find that the some of the Old Masters didn’t actually paint all their pictures, they had assistants. The idea formed that I would too have assistants but they would all paint one square each and all be credited in a democratic way.

Since then I have completed many projects. Each one is unique depending on the location, the event and the participants.
The work relates to Nicholas Bourriaud’s theory of Relational Art. He says Relational Art is “a set of artistic practices which take as their theoretical and practical point of departure the whole of human relations and their social context, rather than an independent and private space.”

In Relational Art, the audience is envisaged as a community. Rather than the artwork being an encounter between a viewer and an object, relational art produces inter-subjective encounters. The artwork creates a social environment in which people come together to participate in a shared activity. I am interested in reaching audiences which don’t often go to galleries by creating projects in public places, places of work and institutions.

My aim is to create a whole gallery of recreations, a kind of alternative collection of Old Masters where each work was created by “ordinary people”. Although no one can doubt the power, skill and mystique of the Old Masters, especially as many ancient techniques are now lost to us, the work I make in collaboration both pays homage to and pokes fun at them. Although made from a patchwork of styles and talent the end result can often be dazzling.

“I like the idea of demystifying the process of oil painting, opening it up so that anyone can have a go. Using an ‘Old Master’ gives a sense of achievement to participants and also questions the ideas of authorship, genius and style by fragmenting the image and juxtaposing the ‘handwriting’ of many painters. It is also interesting to transform the normally solitary, private activity of the painter into a communal, public one.

I  was born and educated in Guernsey, Channel Islands and studied Fine Art at Portsmouth University after which I completed a postgraduate degree in Painting at The Royal Academy of Arts in London. On graduation I was awarded a DAAD scholarship to study at the Kunstakademie Dusseldorf under Professor Gunter Uecker for two years.

Here, my work turned to the area of performance and installation. Among the highlights during this period were a six week residency and exhibition in Mauritius where I lived with a Tamil family, taking part in ” Cavadee” a local ritual and a studio visit to Wuppertal to meet Pina Bausch.


Back in the U.K I combined teaching art for three years as a first year Tutor in Guernsey, under Artist Eric Snell with my studio practice in London and in 1999/2000 I traveled to India, Thailand and Nepal.

In 1999, I was invited to be artist in residence in my old school and, looking for a way to combine painting and performance, as well as invite people to collaborate in my work, I made my first Re-creation Project;  A re-creation of the “Arnolfini Marriage” by Van Eyck.

This work has become an important part of my art practice and I have subsequently completed many re-creation projects nationally and internationally including; The National Gallery, London, The United Nations, Lebanon and The Museum of Fine Arts , Valencia, Spain.


Parallel to the Re-creation work, I continue to develop my painting practice and am currently producing abstract work where the process of painting, a kind of automatism and colour are the main concerns. I am currently working out of a studio  in Valencia, Spain.