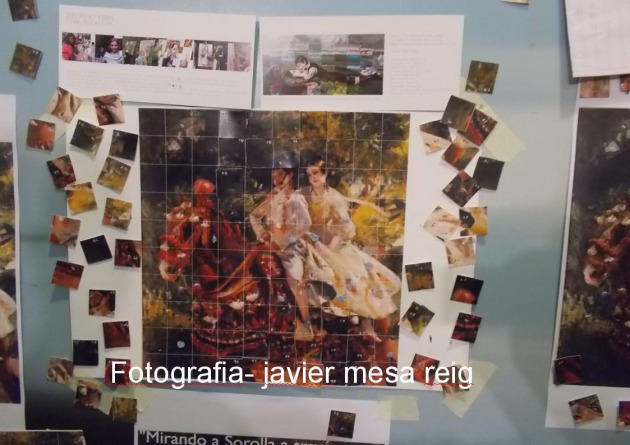 A painting depicting the death of St Edmund, the former King of East Anglia, is being recreated by about 100 people in Suffolk over the weekend.

Artist Tina McCallan is running the project at Wingfield Barns, near Eye.

The recreated work is based on Brian Whelan’s painting The Martyrdom of St Edmund, which hangs in the cathedral in Bury St Edmunds.

Participants will be given a square of canvas to paint. Once complete, the new version will be displayed in churches.

The project was commissioned by David Streeter, a retired vicar from Stradbroke, to celebrate the 100th anniversary of the Diocese of St Edmundsbury, of which St Edmund is the patron.

Ms McCallan has carried out a number of public recreations of other works of art at places including the National Gallery, Glastonbury Festival and a Lincolnshire pizza factory. 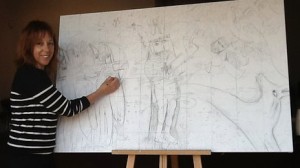 Mr Whelan’s original painting depicts Edmund, who is believed to have been elected King of the East Angles in 855 AD, and was beheaded by the invading Danes in about 870 AD after refusing to denounce Christ.

Ms McCallan hopes up to 100 artists and members of the public will help paint a new version. No experience of painting was necessary, she stressed.

I grid out the canvas and then copy the image into that. It’s a little like the way the Old Masters worked,” she said. About three or four people can work at the same time. Occasionally we get a bit of nudging and smudging, but people are generally very aware that others are working in close proximity. The project allows the community to create their own masterpiece… demolishing the idea that art is something elitist and inaccessible.

Painting the drawing of The Martyrdom of St Edmund The project celebrates the 100th anniversary of the Diocese of St Edmundsbury
Family paints St Edmund martyr recreation The finished painting will be displayed in a number of Suffolk churches. 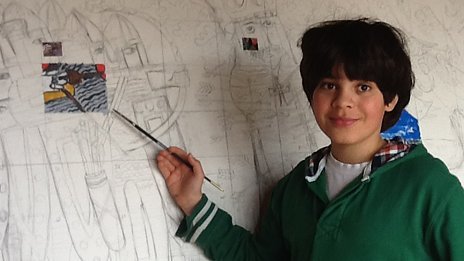 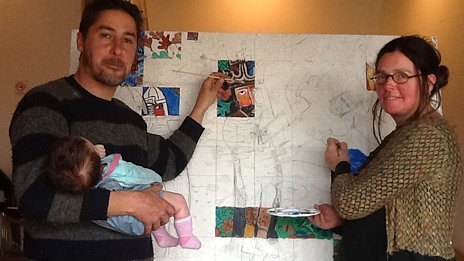 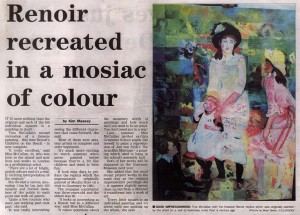 Guernsey’s Princess Elizabeth Hospital has been recreating a Matisse masterpiece!

Patients, doctors and nurses have been encouraged to join in with the community arts project.

The project was made as simple as possible so that anyone, whatever their skill as a painter, could take part. The whole painting was divided up into squares and participants were given a little example of what to do – a bit like painting by numbers.

Once finished, the painting will hang in the corridors of the hospital so that staff who’ve taken part will have a permanent reminder of their artistic talent.

It was all Tina McCallan’s idea:

“When you’re in hospital, you’re sort of trapped in a hospital bed. So I thought I would create an alternative view out of the window because the window becomes your only contact with the outside world.”

Tina now has her sights set on Guernsey Prison and Police HQ. 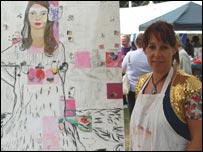 Tina McCallan with her artwork

Tina McCallan organised the recreation of a famous floral artwork at the 2009 North Show. People were invited to paint a square on canvas in their own style. The finished result was a colourful patchwork of art.

Tina’s life as an artist started in Guernsey where she studied art at the Grammar School before heading off island to pursue it as a career. 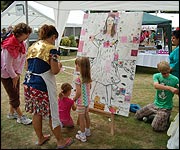 Children paint a square of the grid

The artwork used for the North Show piece was by Gustav Klimpt and was chosen because “it’s very kind of flowery, very sugary, sweet, but the girl looks quite confrontational and that kind of reflects the theme of the Battle of Flowers,” said Tina.

Tina cut up a copy of the original painting into 200 squares and handed out the squares for people to copy. “They try to copy the colours really, but as you can see people are allowed to interpret it how they want.”

The perspective created by the different squares is “like looking through lots of different people’s eyes,” according to Tina. “It’s really interesting how one person might see pink in one particular way and another sees it in a different way, but it’s all pink.”

An interest in art that brings communities together has taken Tina from Guernsey to Germany, Turkey, London and France. She has worked on around 20 collaborative art projects, four of these in Guernsey.

“It’s always amazing, you never know how it’s going to turn out and it completely depends on who turns up … it always turns out really well, the secret is the grid, it holds the whole image together.”

Tina is still deciding what to do with the completed picture. “I’m going to talk to the organiser of the Battle of Flowers about donating it to The Princess Elizabeth Hospital to hang in their Art wing.

N.B. The picture can now be seen in the collection of the P.E.H.